Crete is a continent!

Hiking Creta team will organize the ideal tour for you.

Christos Paterakis is the founder and owner of Hiking Creta and Sailing South Crete companies.

As a means of moving to the mountains, he has found the mountaineering ski in which he is a graduate of the faculty of the Greek mountaineering federation, and today he is the only man in Crete in the winter that goes to work with skiing.

He was not born in hospitals and maternity hospitals in Chania, as some people believe, but his existence is due to the distillation of limestone and granite. From an early age, he preferred to climb on rocks, mountains and snow, as they had a keen interest in him. So, in 1988 he first went to the White Mountains and has since become an inseparable friend with peaks, cuts, gorges and cliffs. It lives and breathes through them at all times, either walking and climbing on their dry, dry stones in the summer or skiing the snow in the winter that they cover every one of their scenes.

In winter, the Kallergis mountain shelter is open every week, while in the summer he tries to convey the idea of climbing to young children, being the program manager at the children’s mountaineering centre organized by the Chania Mountain Club in the Tauris shelter. Besides the White Mountains, it has climbed and climbed many times in the Alpine Mountains, with more significant ascents to the Matterhorn, the Dolomites, the Teeth of Giant and many other classics. He has also climbed to Yosemite in California.

Read more about us 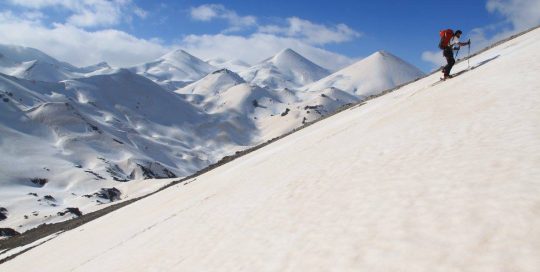 Hiking Creta team will organize the ideal tour for you. [...]

Send us an email and explain to us your willing about your ideal hiking tour and we will organise together the perfect trip!

Do you need information about the Kalergi Refuge?

Do you need information about the Kalergi Refuge?

for wintertime (October until March) :